Here is my final day of the Five Photos, Five Stories Challenge. I would like to thank Meredith from Meredith’s Musings for nominating me for this challenge. It’s been fun choosing pictures to share. 🙂 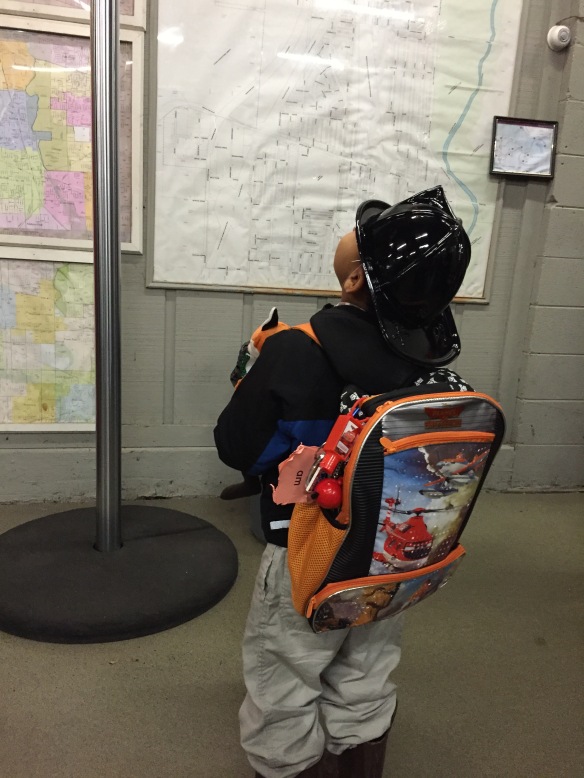 For my final photo, I chose CJ and the fire pole. No one was more excited for Michael to become a fireman than 5 year old CJ. At his dad’s swearing in, CJ was decked out in his fire boots, fire hat and air pack (book bag) on his back with his sidekick, Foxy, dressed in her fanciest necktie. The high light of CJ’s experience was when his dad slid down the fire pole. Since Michael was wearing his good suit, I was just hoping he wouldn’t damage it- or himself- on the way down.

Unfortunately Michael had to work on Father’s Day a few weeks ago, so we had CJ and Beej with us. When his dad called to chat, CJ asked him if he could slide down the pole. Michael told him regretfully that he could not. CJ pleaded, “Pleeeeease, Dad! Can you slide down the pole and take a selfie?”

We couldn’t hide our grins on our end and Michael’s voice shook with suppressed laughter when he said he really couldn’t do that.

CJ held his arm out in front of him, holding the phone facing him while wrapping his free arm around an imaginary pole. “Sure you can! See?”

Michael said that wasn’t possible (or that easy) and offered to send him a picture of his fire gear. CJ said okay but added, “And be sure to take a picture on the pole!”

Last week the topic came back up when Michael asked CJ if he remembered when he sent him the picture of his gear. CJ replied, “Yes, but you never sent the one of you on the pole.”

Something tells me this discussion is far from over- no matter how much Michael would like it to be.

Thanks so much for reading along as I shared these photos! It was a fun five day!!!

Today is Day 4 of my participation in the Five Photos, Five Stories Challenge.

The year was 1974 and that scrawny 10 year old in yellow is me. I really do not have a story to go with this picture. I was searching through old photos and honestly, that outfit jumped out at me. I’m not sure if it’s a top and short shorts or a very short dress with panty- like shorts. All I know is that there’s a good chance my mom could have made it. The red ric rac trim makes it look handmade. And the cute little red Keds that I’m wearing were not to pull the outfit together. Those were my shoes and I wore them with everything- I was 10. Matching didn’t even occur to me. Besides, it was the 70’s. Looking back at the styles that were popular then, I have to wonder what everyone was thinking. Oh, the good old days!

Then each day, nominate another blogger to carry on this challenge. Today, I’m not nominating anyone. You are welcome to jump in and take part! I would love to see your photos and what you come up with! 🙂

Here we are at the top of the hill, hump day, Day 3 of the Five Photos, Five Stories Challenge. I would like to thank Meredith for nominating me. This is turning into a real challenge for me. 🙂 It’s exactly what I needed to help get me out of a slump. Be sure to check out Meredith’s blog, Meredith’s Musings when you get the chance.

There are certain attractions we must experience every time we visit Disney World, especially Magic Kingdom. This is non-negotiable. And as you can see from today’s picture, It’s a Small World, is one of those. Others include Winnie the Pooh and Peter Pan. YES, all of my children even went on those rides last year at their advanced adult (23,21,18) ages. How did I get them to go on these rides? Here’s the funny part. The first time we were in Disney World, back in 2002, it was raining, pouring, and the nearest ride was Winnie the Pooh. I never told them they HAD to go on the ride. They just did. And on each subsequent trip- 2006, 2012, 2014- they just fell into line and went for the ride. I like to think that they secretly enjoy the rides and don’t want to admit it! Or maybe they are just really sweet kids and they do it for me. Either way, these rides are staples in our Disney experience and in 4 or 5 years when we go back again, they will remain on our short list.

Then each day, nominate another blogger to carry on this challenge.

I would like to nominate Joyroses from Nuggets of Gold to take part in the challenge and keep it going.

3 months ago, (okay, three months is way too long,  I know!) my friend, Meredith – Meredith’s Musings- Joie de Vivre nominated me to take part in the Five Photos, Five Stories Challenge. I really dilly-dallied on this one because I had this idea that I would become super organized and plan out all 5 days in advance…… and because I just could not decide on any photos, time passed. Since no one was going to give me a much needed kick in the butt, I decided to shove myself right into it and just DO IT! 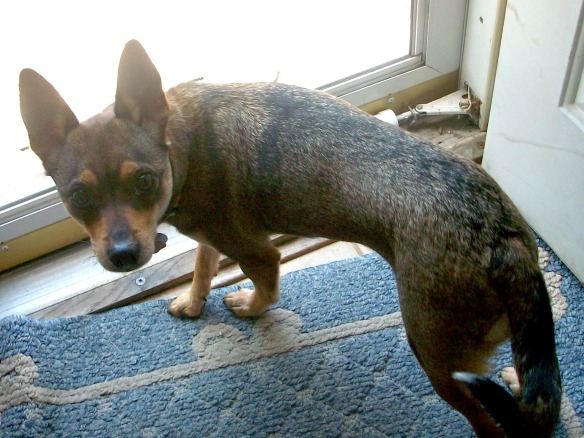 Let me introduce you to our dog, Ari. She came to us from a shelter in late May, 2010. She was only 9 months old at the time, a very slight 11 lbs. She was a bit of an impulse addition, if you ask my husband. I had known for awhile that I wanted to get a dog. Our middle child was just ending junior year of high school and I wanted K to have the opportunity to bond with our new addition before leaving for college the following fall. I remember mentioning to my husband that I thought it would be nice and that the timing was right but according to him I never mentioned another word until I sent him the picture of Ari, who I had already adopted. Oops.

Ari grew to 20 lbs and a personality that is much larger. She does not like storms, wind, fireworks, men with hats, men holding anything that might be construed as a weapon, people singing Happy Birthday or people clapping. She is very opinionated and can hold her own in a barking contest. She is very protective of us and especially “her” baby, Beej.

Having shown us how well she can care for a baby, she feels it is high time she is allowed a pet of her own. She understands that her first choice- a kitten- is not practical since I’m allergic to cats but she will settle for a puppy. She does not understand why we told her no.

She loves singing along when Kris plays his bass clarinet or Andrew plays his trombone. She can chew a bone like nobody’s business and loves a good game of tug of war. She is the best licker in town. And she is the biggest baby- always wanting to be curled up in someone’s lap- all 20 lbs of her!

It feels as if Ari has been with us much longer. The kids got sad during a recent conversation when someone referred to “the next person to die” and I told them that could very well be Ari…. She came home with me one day and it felt like she had always been there. Although the smallest, she is certainly the loudest member of our family. I can’t imagine life without her.

A dog is the only thing on earth that loves you more than you love yourself.

Then each day, nominate another blogger to carry on this challenge.

Today, I nominate Prajakta at The Armchair Perfectionist .