…while life was busy burying me, I realized that I had an A to Z Challenge to complete. As I tried to claw my way out of this hole, I noticed that there were challenges that seemed to all line up so I could tie things together nicely and almost totally put the lid on them.

As April came to a close, things ramped up with my loved one and all of my time and energy was spent with those matters. Needless to say, this resulted in my U and X of the A to Z Challenge. My life was momentarily and permanently turned UPSIDE DOWN as I experienced the EXIT of one phase of my life and the beginning of another. Still processing and dealing with major changes in my life, I barely had time to catch my breath before I needed to address my eye issues once again.

This time, it was in the form of a surgery to repair problems that have been plaguing both eyes for years. This surgery had been scheduled a few months ago so I knew there was no putting it off. The strain on my eyes over the past years has taken it’s toll. I’m nearing the halfway point now- halfway between the first eye surgery recovery and the prep for the second. Although I know in the end I will be happy that I went through this and amazed at my newfound ability to SEE, right now I’m just kinda bummed out. It’s been a difficult year and being near the halfway point of eye shenanigans has shown me what I can expect for the other half. I am at a point where my vision isn’t awesome if I look out of both eyes at the same time…… so things like reading and writing are a challenge. (Please disregard any errors in this post…..thanks!) Factor in my terror at anything being done to my eyes,  and you might understand why it’s all kind of getting to me. And this is where the Y comes in- YOUR VIEW, which from here is not very clear! As you can see from the lovely glasses that I’ve had to wear for the past week, it’s a good thing I didn’t feel well or else I would have been running all over town showing off those cool shades!! Of course, my driver (because I’ve been under a no-driving restriction) would probably be less than thrilled with my adventures…

Meanwhile, this post is almost to its breaking point with all the challenges it is covering! 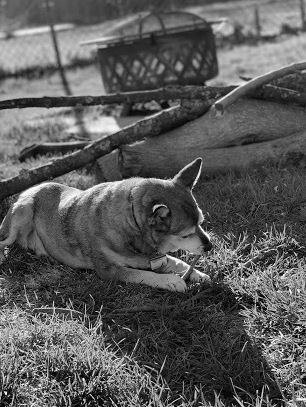 Here is Ari- doing her part for Cee’s “from the side” challenge!

Cee’s Black & White Challenge- From the Side

So, what have you been up to lately?

Wishing you a happy week!

So, I think I missed a week or two somewhere. One minute I was here recovering from the A to Z Blogging Challenge, getting all pumped up to get back to business and the next thing I know it’s May 11th!

When you last saw me, I was headed east to visit Andrew at school. I found myself deep in Cav Country (Cleveland Cavaliers, for those that don’t follow basketball) wearing my favorite Bulls hoodie. (The Bulls had not yet begun their battle with the Cavs in the Playoffs. They are currently tied 2-2.)

We were delighted to find out that there was a tattoo convention at our hotel! This provided us with endless entertainment for the weekend. When we weren’t searching out the most tattooed person in NY, we took a quick trip to the US side of Niagara Falls and watched Andrew in his final performance of the school year. We couldn’t have asked for a more beautiful weekend.

I arrived home last Monday and fully expected to jump back into my regularly scheduled life but life had a plan of its own. In addition to interviewing candidates, I found myself doing a lot of unexpected babysitting. Since I love baby Beej like crazy, I didn’t mind. (I did, however, mind falling even farther behind on my life.) 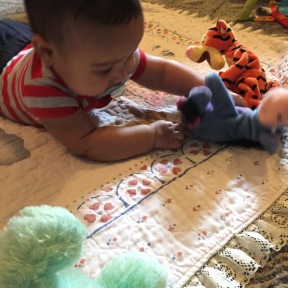 And that week ended with Mother’s Day, which included breakfast with the little guys and a Bulls game with my husband. In case you are wondering, I am the Bulls fan, he is not. It was a great game despite them losing to……yes, those Cavs and that blasted LeBron…. but there are at least 2 more games left to play, if not 3! It’s not over, til it’s over, right?

That brings us up to today, which was full of meetings. Tomorrow is the day that shall not be named (aka my bday) but I won’t have much time for it. Lots to do! And hopefully I will be able to climb back onto the grid!

All I wanted to do was write a post about the Kat Got Your Tongue Challenge taking a break. That’s all.

Oh yes, and to explain, apologize, make excuses, cry, whine and wail about being sick and then being tied up while my son, Andrew, was home for spring break and various other tidbits.

And WP goes and changes things on me! I can’t even complete a post without losing it. That sidebar on the left is completely throwing me off. I’m behind on my writing, reading, commenting and liking all your awesome posts!!!

And worst of all is my sister is coming to town and my siblings need something from me. To get back story, you can read about it- The Apple Cart and then more  Square Peg. This will explain why I’m less than thrilled with this upcoming visit.

And if you feel a disturbance within the force later this week, my apologies…..

I feel like the White Rabbit from Alice in Wonderland, rushing from place to place, frantically looking at my pocket watch… or my cell phone as the case may be. I lost a week of my life due to a very untimely jury summons.

I am a bit overwhelmed- like I was right before we took Andrew to school. I’m playing catch up from a week of communicating only through my phone when I had a few free minutes (and was able to send or receive any messages from an almost 70 year old courthouse). I’m exhausted from a combination of driving a nearly 2 hours one way commute every day and the stress of the trial. I’m faced with a pile of tasks, errands, meetings, obligations and other fun every day life things that have been neglected.

And then the icing on the cake is that I signed up for Writing 101- AGAIN! I failed miserably the first time and I cannot let it rest. I need to successfully complete it this time or it will nag at me. 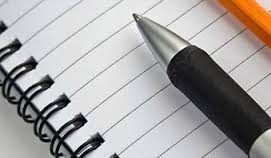 So, here goes nothing! Time to don my Supermom cape and do it all! Wish me luck! Try not to laugh too hard when my cape flies over my face and I crash into the side of a building…which will probably be some school where I’m supposed to be attending a function! 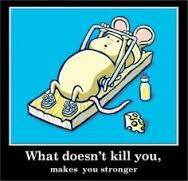 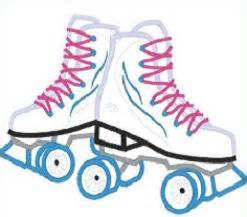 Are you familiar with NaNoWriMo? The premise is quite simple. You write a novel or at least 50,000 words in a month. It doesn’t matter if it’s total crap. You are not supposed to edit. Just write.

I’ve written a number of drafts in the past few days but posted none of them. They are crap. My thoughts are not coherent. I’m not sure what I’m trying to say. My head is swirling with post topics, packing lists, committee plans and life. With each day that passes I feel the panic rising and the pressure to produce something worth reading grows. In other words, I have been writing total crap.

So until things quiet down, here is a quick update-

Kris is home! He was in Orlando for 7 months and we only saw him twice in that time. He brought home is usual chaos and clutter but I guess he wouldn’t be Kris without it. He’s taken a few missteps, which I will talk about in another post, but he started back at school and it looks like he will be done with his Associate’s Degree next semester. Woohooo! He has been applying and interviewing for jobs so we are hoping he gets some good news on that front. The only other thing left to deal with is a car, since his died somewhere outside of Nashville on his drive home. (Did I mention that?)

Big Family Gathering- The relatives came. They did not come to play. No one exchanged harsh words. No one came to blows. I had hoped my sister and her family would come around a little……make an attempt with Kris…..anything. I had really hoped that my mother would have shown more of a sign of support for Kris (and me, too, I admit it!) in front of my sister because I feel like that might be the kick in the pants she needs. The way things stand when my sister is around, my mother becomes silent. It’s not as if she’s overly demonstrative on a good day but it’s obvious she is on my sister’s team and me and mine are not included.

College Boy- We will be leaving on Saturday to take Andrew to college. Yesterday was another big shopping day. Today is laundry and organization. I know it’s a good thing. I know it has to happen. Just let me have my sad moments and my tears. It will help me deal with him not being around and I will be able to move on. Okay?? 🙂

Grandkids in action! Little CJ begins kindergarten on Monday. He will be attending the school I went to as a child. 🙂 I’ll be missing his first day because we will be moving Andy into his dorm but I’m looking forward to seeing lots of pictures! And the grandbaby is making his presence known. After playing possum on me for weeks, I finally felt him move! I can’t wait to see this squirmy little guy who is causing Jasmine to have hiccups all the time.

Then there are all the regular Back to School doings- being on the board, I have meetings and events to attend, committee work to organize and all the fun that goes into an important but underpaid ($0) position in the district.

I have been trying to keep up on reading everyone’s posts. And if I’m doing more “liking” than “commenting” but I hope to change that soon!

Time for me to fly. I need to order a music book that Andrew needs….well last week, I guess!

FROM ONE PARENT TO ANOTHER