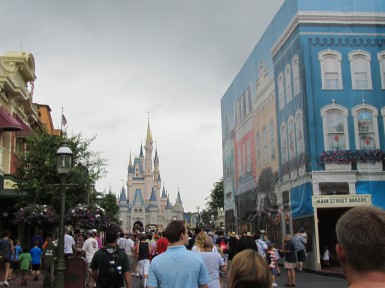 Our (first) trip to Disney World was very carefully planned. We wanted to be sure to take the kids when they were at the best ages to enjoy it, which meant ensuring that Andy was old enough to remember it and Michael was still young enough to enjoy it. We thought that once the kids reached a certain age they would no longer want to go. We were wrong and that trip was the first of four. Looking back we unknowingly began traditions which would be repeated each time after that first. 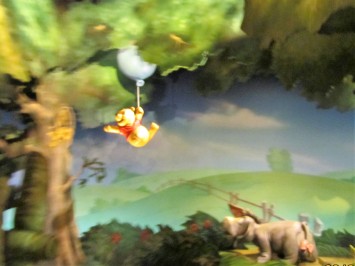 Florida is known for its sporadic summer rain showers that pop up out of nowhere and our trip was no different. One day in the Magic Kingdom as an infamous shower pour down, we frantically looked for shelter.We weren’t the only ones! We decided that a ride would be our best escape since most people chose to stand in the doorways of the shops. In our immediate vicinity we spotted the Winnie the Pooh ride and Cinderella’s Carousel (now Prince Charming’s). The kids chose Pooh.

The Pooh ride became the first in our list of must rides. Joining Pooh was the Peter Pan ride and the Small World. Peter Pan was one that everyone enjoyed so the arm twisting was kept to a minimum when we got in that line but Small World has always been a bone of contention. To me, this is a Disney World MUST. To this day, some of my children might not agree but I will forever pull rank on them and we will always “suffer” along with the other thousands of people on the ride. Consider it a rite of passage.

Another moment that stood out on that trip took place at Epcot. We were working our way around the countries, the kids were tired, wet and hungry, and we needed some place that had food for two picky kids to eat. Just as the skies opened up,  we were caught in a torrential downpour, and at least two someones needed to use the restroom, we reached America! It was the answer to our prayers and we gratefully and soggily made our way into the very familiar feeling American fast food place. This kicked off our Epcot tradition of eating in America, despite being surrounded by countries with so many exciting and unfamiliar foods. On a side note, it traditionally rains at some point when we are eating there too.

That long ago trip when the kids were still kids laid the groundwork for future family trips. I’m sure if someone had told us that the drippy soggy decisions we made would not only be fond memories, but also become woven into each future experience, we wouldn’t believe it.

Our next trip is tentatively scheduled for 2020 when little Beej will be 5 and his big brother will be 10. I can’t wait to see what that experience at the Happiest Place on Earth will bring us!

2 thoughts on “Happiest Place on Earth”