Blogging From A to Z Challenge: Y

Yesterday Once More– The Carpenters- 1973 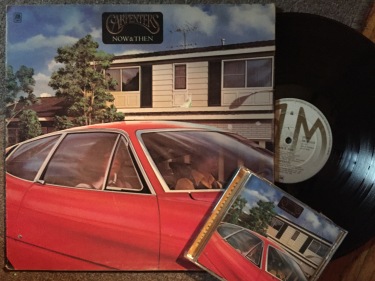 I still have my original album and CD. 🙂

I didn’t have to look far to find my original album and CD. The CD was close by, along with Purple Rain, Grease, and a stack of other old favorites.

Even when I was young listening to the radio, I knew. Music was that much a part of my life that I just knew that this song about other songs was the real deal. I knew that there would be songs that I would always associate with certain peoples, places or events for the rest of my life. I was right. As I’ve worked my way through the alphabet with the A to Z Challenge, I’ve time traveled through my life, hopping back and sometimes way back, to revisit so many songs that have touched my life.

I remember laying on my bed, listening to this album over and over again. I loved the sound of Karen’s voice and how beautifully it blended with Richard’s. The first version of Ticket to Ride that I heard was the Carpenters’ so it took me awhile to get used to the Beatles’ faster version.

I cried when I heard that she had died. Knowing a girl in my class who struggled with an eating disorder, Karen’s death hit close to home. Little did I know that Karen Carpenter would be the first of many incredibly talented people whose lives would end much too early.

Thanks for stopping by!